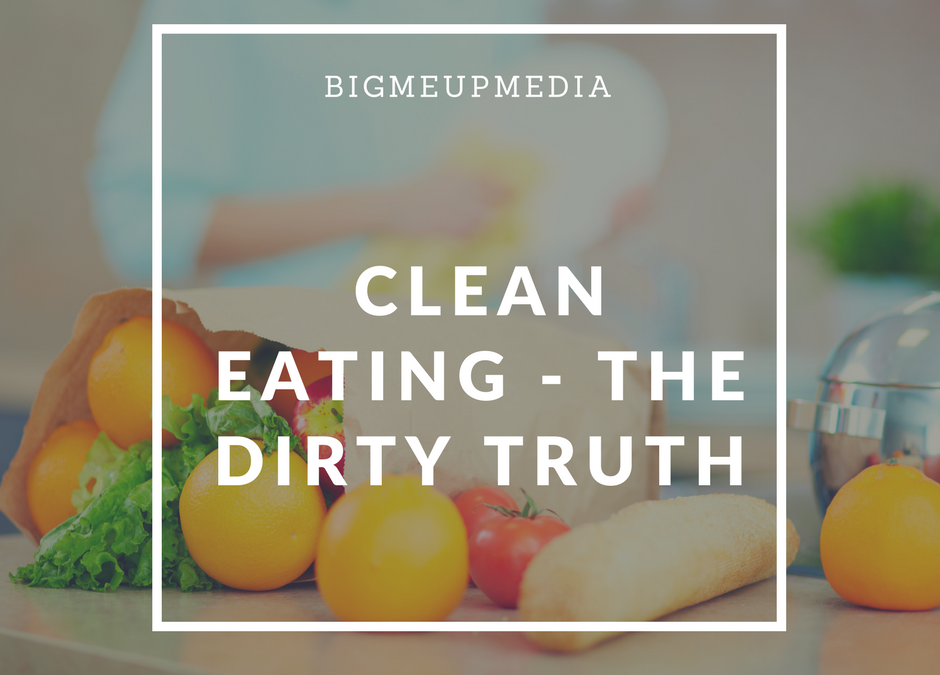 On the week that Donald Trump was inaugurated as the 45th President of the United States and Clean Eating and it’s rise to fame was derided in a BBC documentary I am here to tell you.

No I am here to reinforce the message that social media is a powerful, powerful tool that IS changing the world.

I’m sure you already know that.

You are in it and have seen it’s development over the past 13 year since Facebook launched in February 2004.

It seems that the masses (let’s call them the traditionalists or the establishment) are still unaware of it’s power and are a little upset at the power this new influencer can wield.

I just want to hammer that home to you first before I get stuck into my rant.

If you didn’t know how powerful social media was before this week you do now.

Now my rant isn’t going to be about Donald Trump or the presidency as I never talk politics [journalists are always, or should be, impartial when it comes to politics, it’s part of our moral compass along with always being fair and accurate in our reporting of events]

No I am here to talk the BBC Documentary aired this week on Horizon. Clean Eating – The Dirty Truth.

​​​​​​​The title should give you a big clue as to where the programme was heading.

First off let me lay my cards on the table so you know immediately where I am with this piece of reporting and say “I expected so much more from the BBC and the Horizon team who usually produce excellent work.”

Next let me try and highlight the main points about why this particular programme was so far removed from anything we would call journalism.

I’m ignoring the fact that the presenter was a scientist and not a journalist in fairness to citizen journalists as I do feel they have a place in today’s “social media” society.

However the producers and programme makers and the BBC do not have any excuse for this appalling attempt at a documentary.

The program bases it’s entire argument on the premise that eating healthily  and social media go hand in hand in some dirty way – out to exploit people.

They made a big deal out of the fact that the leading gurus in this field were Instagram entrepreneurs who posted pictures of their food on Instagram and built up a following or audience to then sell to.

Yep that’s how the world works now – are they only just getting that?

That’s how modern business is done.

The scientist presenter Dr Giles Yeo wasn’t even on Instagram and only joined and got his followers up to just over 200 to kind of prove a point which we never did see the result of – maybe it was a plan that failed and so was just edited out. I wonder if he was hoping to get 1 million followers (just like Ella) to deride the leaders in the field so he could say how easy it was but quickly discovered it isn’t easy and actually takes a lot of hard work and commitment.

The three main healthy eating “gurus” they featured were:

Ella Mills from Deliciously Ella who promotes plant based foods.

Hemsley and Hemsley the sisters who advocate a gluten free diet.

and Natasha Corrett from Honestly Healthy who popularises alkaline eating.

Only Ella agreed to appear on the show and I think she came across very well.

None of them – as far as I know call themselves Clean Eating advocates as such, it’s more about the categories listed above and eating real food.

Now my ONE BIG QUESTION HERE is why was it all women?

And why wasn’t Joe Wicks aka The Body Coach cited in this social media mix especially as he is  the leading Instagram healthy eating guru with his Lean in 15 brand?

Do you think it might be because the BBC Worldwide promotes his DVD Lean in 15? http://www.bbc.co.uk/mediacentre/worldwide/2016/bbc-worldwide-announces-dvd-deal-with-fitness-guru-joe-wicks

Both the Hemsley sisters and Honestly Healthy declined to take part in the program but instead of finding other sources to back up their argument the Horizon team just used their refusal to take part as some kind of proof that they were right.

Next they moved over to America to focus on a man facing 3 years in prison for treating cancer patients with alkaline food. Talk about extremes. That would’ve made a great documentary on it’s own and I am still baffled as to why it was included in this particular program.

Perhaps it’s a case of tarring everyone with the same brush.

You can see why clean eating got a bad rap when featured alongside alleged criminals.

The language used by the presenter was inflammatory and designed to paint a picture rather than substantiate claims or provide evidence.

And just saying Clean Eating is a new fad doesn’t make it a new fad – forgive me if I’m wrong but haven’t we in the fitness industry been talking about it for around a decade now, maybe more? It was certainly around 7 years ago when I first joined the scene and I was late to the party.

And also since when was eating ordinary food and cooking it from scratch – bad for you? Or have I missed something?

Why didn’t they speak to any of the amazing fitness professionals out there who have been having great success with the clean eating method for years?

Maybe we should all stick to the Government guidelines which has so far resulted in obesity rising year on year and over 60% of the population being overweight according to the latest Government figures.

Yes I am being ironic.

It was an awful attempt at journalism – in my opinion.

It was also sexist – in my opinion.

And it didn’t offer me any other solutions to the problem it raises and so left you dangling wondering what the answer is then.

It also made out that spreading your message on social media was somehow inherently evil.

Something which if the mainstream and traditionalists and the establishment don’t get a grip on they will get left behind.

There is no stopping social media and the power of the message.

Just look at the changing face of the world this week.

Facebook and Instagram are not fads used by gurus and entrepreneurs. It is the new broadcast medium that is fast becoming the norm and the big brands are just starting to recognise that too and jump all over it.

We are still in the early days.

We are the early adopters.

The rest of the world has been slow to catch on.

While scientists have been busy working in laboratories these modern day gurus have been busy building an audience and educating people in their way of thinking when it comes to food.

The “reporter” made a lot of the fact that the gurus had amassed a big income from their various projects.

At the end of the day we all live in a free market economy and the last time I checked we had the power of free speech.

Social media is all about spreading good ideas and sharing our message with the word – maybe it’s time the establishment and the mainstream caught up with the rest of us instead of using an old fashioned medium to try to shoehorn your biased opinion down our throats.

What did you make of the programme? I’d love to hear your thoughts below.

This website uses cookies to improve your experience while you navigate through the website. Out of these cookies, the cookies that are categorized as necessary are stored on your browser as they are essential for the working of basic functionalities of the website. We also use third-party cookies that help us analyze and understand how you use this website. These cookies will be stored in your browser only with your consent. You also have the option to opt-out of these cookies. But opting out of some of these cookies may have an effect on your browsing experience.
Necessary Always Enabled
Necessary cookies are absolutely essential for the website to function properly. This category only includes cookies that ensures basic functionalities and security features of the website. These cookies do not store any personal information.
Non-necessary
Any cookies that may not be particularly necessary for the website to function and is used specifically to collect user personal data via analytics, ads, other embedded contents are termed as non-necessary cookies. It is mandatory to procure user consent prior to running these cookies on your website.
SAVE & ACCEPT